A number of different individuals and bodies provide leadership in each House. They have important powers and responsibilities, ranging from the administration of each House to stewardship of parliamentary business and procedures. This guide takes you through them.

How is the Speaker elected in the House of Commons?

How is the Speaker elected in the House of Commons?

The House of Commons elects its Speaker:

A Speaker election at the start of a Parliament is normally uncontested, assuming that the previous Speaker has been returned to the new House of Commons and wishes to take the post again.

A Speaker election during a Parliament is normally contested. If so, it is held by secret ballot.

Speaker election at the start of a Parliament

The election of a Speaker is the first item of business in a new House of Commons, and takes place on the first day of a new Parliament. This is because the House cannot carry out any other business until it has a Speaker.

Until the House has chosen a Speaker, the Father of the House takes the Chair.

Father of the House: the MP with the longest continuous service who is not a minister.

On the day of its first meeting, a new House of Commons meets at 2.30pm to start the Speaker election process.

The procedure for a Speaker election at the start of a Parliament is set out in Standing Order No. 1A.

Lords Commissioners: a group of Peers – usually five – who act in Parliament on behalf of the Queen when she is not present in person.

The Speaker election process gets underway in the House of Lords, when the Lords Commissioners instruct Black Rod to go to the House of Commons and deliver a ‘message to attend’ the Lords.

Black Rod: the Royal official in the House of Lords with responsibilities for order, the residual Royal estate and ceremonial occasions.

After receiving the message from Black Rod, MPs proceed to the Lords, where the Lords Commissioners direct them to choose a Speaker. MPs then return to their own Chamber and start the process of electing a Speaker immediately.

If the previous Speaker stood in the general election, he or she will almost certainly have been returned as an MP, because the Speaker stands as such, not as a party candidate, and major parties other than the Speaker’s traditionally do not stand candidates against the Speaker seeking re-election. 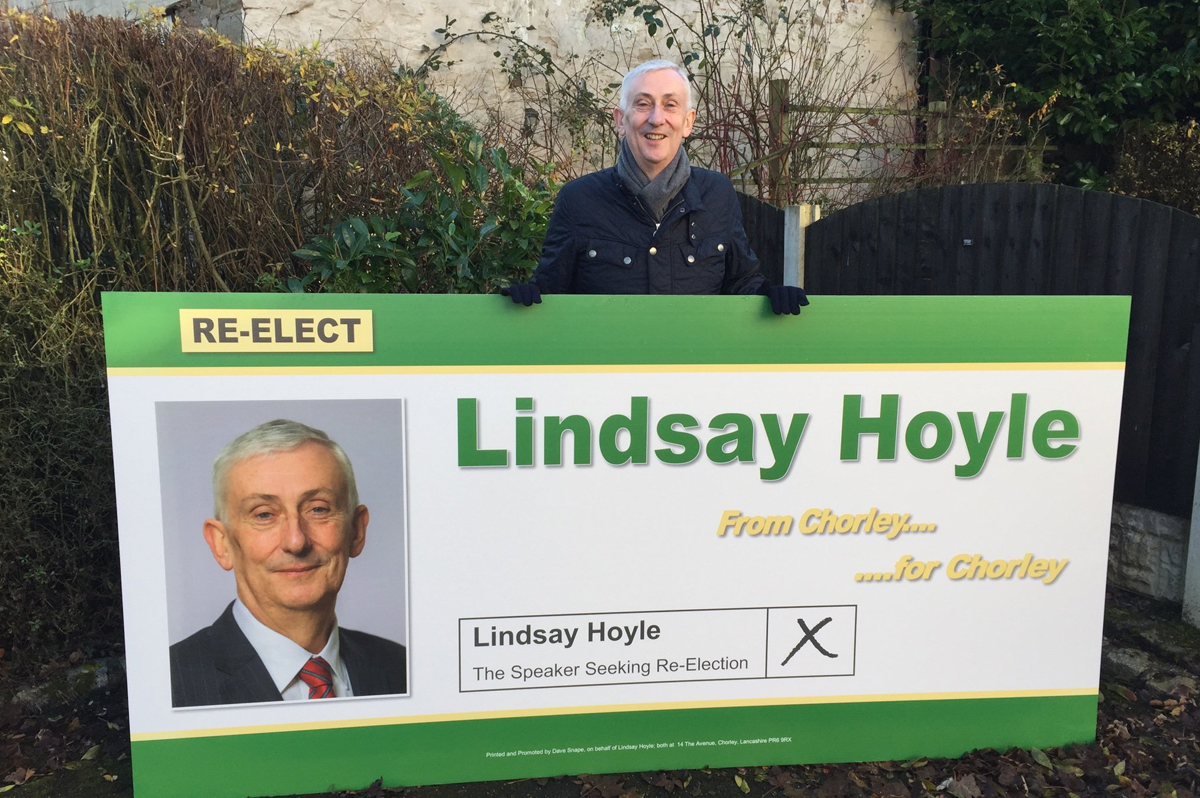 The Speaker of the House of Commons, Lindsay Hoyle MP, seeks re-election in his Chorley constituency in 2019 (via Twitter)

If the previous Speaker is re-elected, he or she takes the Chair immediately.

If the motion were to be challenged, there would be a division (recorded vote) in the normal way, with MPs proceeding through the ‘Aye’ and ‘No’ lobbies.

If the motion to elect the previous Speaker were to be defeated, a Speaker election potentially by secret ballot would be held as if the previous Speaker had left office during a Parliament. The Father of the House, in the Chair, would adjourn the House immediately following the defeat of the motion, and the Speaker election would be held the following afternoon.

If a Speaker leaves office, or if the previous Speaker were to fail to be re-elected at the start of a Parliament, a process is instigated which potentially involves a contested Speaker election by secret ballot.

The procedure for a Speaker election is set out in Standing Order No. 1B. The Father of the House presides over the process.

First, any candidate must be nominated by at least 12 and no more than 15 MPs, including at least three elected to the House as members of a party other than the candidate’s or as members of no party. Nominations must be lodged with the Clerk of the House between 9.30am and 10.30am on the morning of the election, and the names of those nominated made public as soon as possible.

However, the Speakership has been contested every time the post has fallen vacant since 1992.

Assuming there are multiple Speaker candidates, on the afternoon of the election each first addresses the House, in an order determined by lot. This is candidates’ formal opportunity to make their pitch.

Then, a first ballot is held. Each MP may vote for only one candidate. MPs vote on ballot papers, in the House of Commons division lobbies.

If any one candidate receives more than half the votes cast, the Chair immediately puts to the House without debate the motion to elect him or her as Speaker.

Otherwise, the House proceeds to a further ballot or ballots. Each time, candidates are removed who:

The process continues until one candidate receives over half the votes cast or only one candidate is left. The Chair then puts to the House without debate the motion that he or she be elected as Speaker.

By whichever method the House of Commons Speaker has been elected, he or she must still be approved formally by the Queen, represented by the Lords Commissioners in the House of Lords.

“in obedience to the Royal Command, Her Majesty’s faithful Commons have, in the exercise of their undoubted rights and privileges, proceeded to the election of a Speaker, and that their choice has fallen upon myself. I therefore present myself to your Lordships’ Bar and submit myself with all humility to Her Majesty’s gracious Approbation.”

The Lord Commissioner presiding then bestows the Queen’s approval and confirmation of the new Speaker of the Commons.

Then, the Commons Speaker ‘lays claim’:

“in the name of and on behalf of the Commons of the United Kingdom … by humble petition to Her Majesty, to all their ancient and undoubted rights and privileges, especially to freedom of speech in debate, to freedom from arrest, and to free access to Her Majesty whenever occasion shall arise, and that the most favourable construction shall be put upon all their proceedings.”

The Lord Commissioner presiding then confirms “all the rights and privileges which have ever been granted to or conferred upon the Commons by Her Majesty or any of her Royal predecessors.” The new Speaker and the rest of the Commons then withdraw back to the Commons Chamber.

Normally, the ceremony of Royal Approbation takes place the day after the Commons has elected a Speaker. However, as on 4 November 2019, when Sir Lindsay Hoyle was elected with only one sitting day left before dissolution, the whole Speaker election and approbation process can be truncated to a single day.

What are the Speaker's role and powers in the House of Commons?

What are the Speaker's role and powers in the House of Commons?

The Speaker of the House of Commons is “the representative of the House itself in its powers, proceedings and dignity.”

What are the functions of the Speaker?

Erskine May, the authoritative guide to parliamentary procedure, identifies three key roles and responsibilities that lie with the Speaker:

Of the three roles, the second and third – the representative and administrative – have changed most markedly over the last couple of decades. The Speaker today has far more administrative responsibilities than predecessors before 1979, and the issues with which the Speaker deals, as chair of the House of Commons Commission (such as human resources, finance, freedom of information, communications, security, and conservation of the Palace of Westminster) are all more complex and demanding than was the case even a decade ago. The public engagement and outreach aspects of the representative role have also grown, although each Speaker can decide the extent to which he or she wishes to focus on this aspect of the job.

Why is the impartiality of the Speaker important?

Authority and impartiality are identified as the chief characteristics required of a Speaker. Confidence in the impartiality of the Speaker is described in Erskine May as an “indispensable condition of the successful working of procedure”.

Some of the conventions of the House are designed to support the Speaker’s impartiality. The Speaker:

In some legislatures, including in the UK’s devolved legislatures, the Speaker remains a member of his or her party. However, the establishment of the role of Speaker in the Westminster Parliament pre-dates the development of the modern party system. At Westminster general elections, the convention is that none of the major parties stands a candidate against the Speaker.

What are the Speaker’s responsibilities and powers as the Presiding Officer?

The Speaker is responsible for ensuring orderly conduct in the Chamber, in respect of both the behaviour of Members and the exercise of business. The Speaker’s responsibilities and powers include (but are not limited to):

What are the Speaker’s responsibilities and powers in exercising the representative role?

As the spokesperson of the House in its communications with the Crown, the House of Lords, and external authorities outside Parliament, the Speaker’s responsibilities and powers include (but are not limited to):

What are the Speaker’s responsibilities and powers in exercising the administrative role?

How are the Deputy Speakers elected in the House of Commons?

How are the Deputy Speakers elected in the House of Commons?

The House of Commons has three Deputy Speakers, who chair debates in the Chamber when the Speaker is not present.

Committee of the whole House: When the House of Commons is considering a constitutional bill, the whole House – rather than the normal public bill committee – takes the bill’s committee stage.

The two further Deputy Speakers are also the First and Second Deputy Chairmen of Ways and Means.

The Standing Order also prescribes that among the Speaker and the three Deputy Speakers there should be at least one man and one woman.

Unlike the Speaker, the three Deputy Speakers do not resign from their party.

The Speaker normally announces the date for the Deputy Speakers’ election around the time of the Queen’s Speech. In recent years, the election has been held between four and six sitting days after the Queen’s Speech, meaning around a week to 10 days in calendar terms.

Candidates must first be nominated, by at least six and no more than 10 MPs.

Under the default timings set out in Standing Orders, nominations are submitted between 10am and 5pm on the day before the election, and the election takes place between 11am and 12 noon.

If a single Deputy Speaker were required to be elected during a Parliament, the same arrangements would be followed but with candidates restricted to MPs coming from the required side of the House.