The contrasting post-Brexit fates of the two Houses’ EU-focused select committees have come about through processes in the Lords and the Commons that so far have differed markedly. This difference reflects the distinction between government control of business in the Commons, and the largely self-governing nature of the Lords.

Brigid joined the Hansard Society in December 2016 to lead its work on Parliament and Brexit, as well as contribute to its ongoing research on the legislative process, parliamentary procedure and scrutiny, and public political engagement. From 2007 to 2014 she was a Committee Specialist for the House of Commons Foreign Affairs Committee, where she led on the Committee’s EU-related work. In the first six months of 2016 she was on the research team of Britain Stronger in Europe. She has also worked as assistant to an MEP in Brussels and as an analyst and researcher on EU and European affairs in the private sector and at the University of Birmingham and King’s College London.

After completing BA and MPhil degrees at the University of Oxford in PPE and European Politics, respectively, she spent the first part of her career focusing on the politics of post-communist transition and EU accession in Central Europe, and completed her PhD at the University of Birmingham on the case of Hungary. She has given media comment, appeared before select committees and published several journal articles and book contributions. She is a Visiting Research Associate at ParliLinc – The Lincoln Parliamentary Research Centre, University of Lincoln; a Visiting Practitioner Fellow at Sussex European Institute, University of Sussex; and the Hansard Society’s representative on the Executive Committee of the Study of Parliament Group.

The UK’s decision in 2016 to leave the EU raised in short order the question of whether and how the select committee structures in the two Houses of Parliament should change in response. The most obvious question was whether, after ‘getting Brexit done’, there should continue to be one or more dedicated select committees in each House for scrutiny of EU-related matters; and, if so, which one(s).

As of early February 2021, a year after the UK left the EU, and a month into its new post-transition EU relationship under the Trade and Cooperation Agreement, each House retains one select committee dedicated to the scrutiny of EU-related affairs.

In the House of Commons, as things stand, this committee is to be the pre-Brexit-era European Scrutiny Committee (ESC). This is the contemporary incarnation of the committee which the House established when the UK joined the then-EEC in 1973. What had been, since October 2016, the Commons’ second committee focused on EU-related matters, the Committee on the Future Relationship with the EU (CFREU), ceased to exist on 16 January. On 1 February, the ESC asserted its post-transition-period role by launching an inquiry into ‘The UK’s new relationship with the EU’, to which the Chancellor of the Duchy of Lancaster, Michael Gove, is due to give evidence on 8 February.

In contrast with the Commons, on 13 January the House of Lords agreed to abolish the current version of the select committee which it had established after the UK’s EEC accession, the European Union Committee, and establish a new committee instead, the European Affairs Committee (EAC). The EAC is expected to be appointed by April. The EAC’s creation comes as part of a major overhaul of the Lords’ select committee line-up which has been agreed by the House in stages over the last 15 months.

While the contrast in the post-Brexit fates of the two Houses’ EU-focused committees is striking, even more so is the difference between the processes that have led to this outcome.

This is especially the case given the common factor that both Houses have had major reviews of their select committee systems conducted by their Liaison Committees since the EU referendum, in part to consider the select committee implications of Brexit.

The outcomes so far of the debates over the two Houses’ post-Brexit select committee line-ups reflect the difference between government control of business in the Commons, and the largely self-governing nature of the Lords.

In the House of Commons, the continuing existence of the ESC, and the demise of CFREU, have come about by default.

The ESC exists under a ‘permanent’ Standing Order of the House (now SO No. 143), in this case one essentially agreed in 1974. That is, the Standing Order – and thus the Committee – persist unless and until the Order is amended or repealed. By contrast, CFREU existed under only a temporary Order, agreed by the House in January 2020 with a lifespan of one year (to match the post-Brexit transition period). The Order was agreed despite the government having already announced that it would be abolishing, at the end of that month, the Department for Exiting the EU, which the Committee had originally been established to shadow.

After 16 January 2021, for the House’s EU-focused select committee line-up to be different from that which now exists, either or both of these Orders would have had to be amended or repealed.

Ministerial statements that a decision relating to select committees is a ‘matter for the House’ are somewhat disingenuous: as a general rule, this applies to the decision itself, but not to whether the House will have an opportunity to take it.

The operation of the government’s control of decision-making on select committees is well illustrated by the recent cases not only of CFREU but also of the International Development Committee (IDC):

In these two cases, the Commons Leader acceded to a committee’s request that it should continue to exist in one case but not the other; the House has lost one non-departmental select committee and gained another; in both cases the outcomes have been in line with the existing Orders of the House; and in neither case did the House debate the matter.

With respect to Commons’ EU-focused committee(s), there may be arguments for:

The existence of divergent views among MPs on these questions was evidenced by CFREU’s final report, in which a large majority of Members removed the proposal in the Chair’s draft that there should be a new European Affairs Committee.

Regardless of MPs’ positions or the merits of the various possible options, the problem as things stand is that there is no guarantee that the House as a whole will be able to hold a debate on the way in which it wishes to scrutinise EU-related matters in future.

Compared with the Commons, the key feature of House of Lords’ procedure enabling this process is that select committees have access to time on the floor of the House for their reports to be debated and, under some circumstances, can move an amendable motion that the House agrees with a report.

While the process of select committee-related decision-making in the Commons favours the status quo unless the government decides on change, the process in the Lords over the last three years has led to a thoroughgoing post-Brexit overhaul of the House’s select committee structures. Especially notably, in the shape of the International Agreements Committee (IAC) the Westminster Parliament has acquired its first treaty committee.

At the start of the Liaison Committee review process in January 2018, the line-up of House of Lords ‘sessional’ (effectively permanent) select committees exclusively or partly conducting policy scrutiny comprised the European Union Committee, with six sub-committees, plus five other committees.

The line-up of Lords sessional committees that is now in prospect, as shown in the Liaison Committee graphic below, will comprise the new European Affairs Committee and a single sub-committee on the Northern Ireland Protocol, plus, for the time being, 13 other committees. 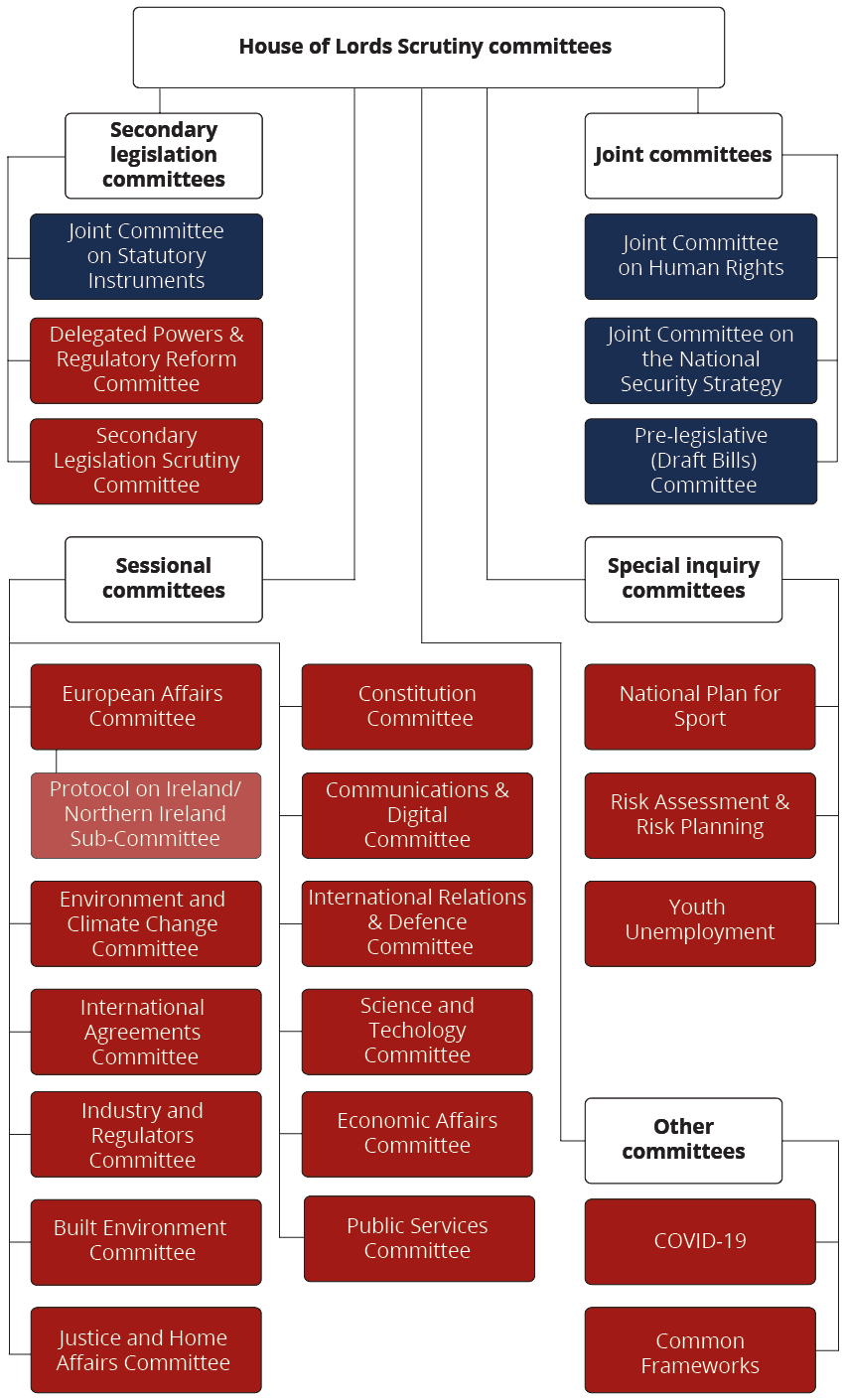