In a crisis the House of Commons is hamstrung if it is in recess, for MPs are not masters of their own House. While any MP can make representations to the government and the House of Commons Speaker to request a recall, under Standing Orders only a formal request from ministers to the Speaker can actually trigger one.

Ruth is responsible for the strategic direction and performance of the Society and leads its research programme. She has appeared before more than a dozen parliamentary select committees and inquiries, and regularly contributes to a wide range of current affairs programmes on radio and television, commentating on parliamentary process and political reform.

In 2012 she served as adviser to the independent Commission on Political and Democratic Reform in Gibraltar, and in 2013 as an independent member of the Northern Ireland Assembly’s Committee Review Group. Prior to joining the Society in 2008, she was head of research and communications for a Labour MP and Minister and ran his general election campaigns in 2001 and 2005 in a key marginal constituency.

In 2004 she worked for Senator John Kerry’s presidential campaign in the battleground state of Florida. In 1999-2001 she worked as a Client Manager and historical adviser at the Public Record Office (now the National Archives), after being awarded a PhD in political history (on the electoral strategy and philosophy of the Liberal Party 1970-1983) from the University of Leeds, where she also taught Modern European History and Contemporary International Politics.

Whose House is it anyway?

The rules governing recall are set out in House of Commons Standing Order No. 13. The Speaker of the House of Commons is only required and able to consider whether the House should be recalled on the basis of representations made by ministers that “the public interest requires that the House should meet at a time earlier than that to which the House stands adjourned”. If ministers make such representations, then the Speaker is required to consider whether the public interest does require recall. If s/he agrees that it does, then s/he must appoint a time for the House to meet. 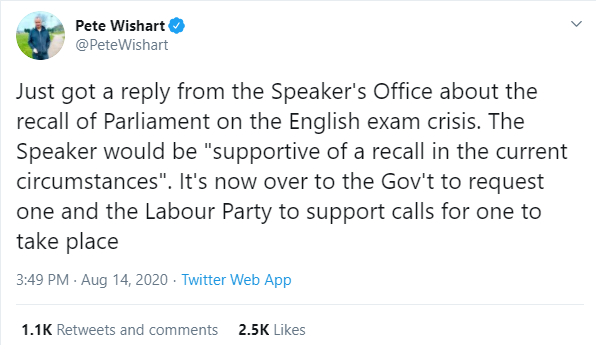 The current Standing Order dates back to 1947, although the government has had the power to recall Parliament during an adjournment since the Meeting of Parliament Act 1799. Between 1920 and 1931 the power to recall the House rested with the Speaker after consulting with the government; between 1932 and 1947 the power assumed its present form, of the Speaker recalling the House but only at the government’s request. This position was then formally reflected in the wording of the Standing Order adopted in 1947.

The current provisions have long been regarded as an inadequate basis for recall. They demonstrate the excessive level of control that the government exercises over the operation of the House of Commons. The House ought to be able to convene itself without having to obtain the permission of the government.

What reforms have been proposed?

In 2001 the Hansard Society’s Commission on Parliamentary Scrutiny argued that if Parliament was to be an effective forum at times of crisis, and retain its significance to public debate, then the rules governing recall had to be revised. The Commission suggested that the Speaker be granted the power to recall Parliament at times of emergency if one or more MPs requested it and following consultation with the party leaders.

In his October 2017 Hansard Society Lecture, then-Commons Speaker John Bercow MP (then also the Society’s Co-President) also called for reform of the recall procedure, arguing that the House belongs to all its Members, not just the minority who occupy ministerial office. In doing so, however, he acknowledged the need to build safeguards into any new procedure, to ensure that the recall process was not open to partisan exploitation and was used only in genuinely urgent circumstances. He suggested, for example, that a petition for recall might be launched “if it involved a relatively high number of our 650 MPs, perhaps a quarter of them, provided that at least a quarter of that quarter were drawn from those who support the Government and at least a quarter from the Opposition.” Such a model would set a relatively high threshold for recall, have the advantage of requiring political balance, and protect the Speaker from being put in an awkward decision-making situation.

To date, however, little progress has been made in reforming the recall rules.

What has happened to reform proposals?

In 2003 the House of Commons Procedure Committee largely agreed with the proposal of the Hansard Society Commission and recommended that the decision on recall should rest with the Speaker.

In 2007, in its The Governance of Britain Green Paper, the then-Labour government proposed that “where a majority of members of Parliament request a recall, the Speaker should consider the request, including in cases where the Government itself has not sought a recall. It would remain at the Speaker’s discretion to decide whether or not the House of Commons should be recalled based on his or her judgement or whether the public interest requires it, and to determine the date of the recall.” However, these proposals were never implemented.

In October 2007 the House of Commons Modernisation Committee also initiated an inquiry into Dissolution and Recall (to which the Hansard Society submitted evidence), but it did not complete its deliberations before the Committee ceased to meet.

Although the 2003 and 2007 select committee inquiries did not make progress, they helpfully set out some of the procedural details that would need to be ironed out in any reform process. For example:

How do the House of Commons’ recall arrangements compare with those in other UK legislatures?

In the House of Lords the Lord Speaker can recall the House after consultation with the government. The House of Lords Companion to the Standing Orders explains that the “Lord Speaker, or, in his absence, the Senior Deputy Speaker, may, after consultation with the government, recall the House whenever it stands adjourned, if satisfied that the public interest requires it or in pursuance of section 28(3) of the Civil Contingencies Act 2004.”

In Wales, in normal times the Parliament’s recall arrangements are similar to those of the House of Commons. Standing Order 12.3 provides that the Presiding Officer may recall the Senedd to consider a matter of “urgent public importance” at the request of the First Minister. However, during the pandemic, temporary changes have been made to the Standing Orders, and the Presiding Officer may now recall the Senedd with the agreement of the Parliament’s Business Committee “to consider a matter of urgent public importance related to public health matters” (temporary Standing Order 34.9).

In Northern Ireland, the Assembly has been recalled on Tuesday 18 August 2020 to consider the situation concerning the grading of GCSE and A-level examinations. In Belfast, under Standing Order No. 11, recall must be initiated for the purpose of discussing one or more matters of urgent public importance if notice is given to the Speaker by (a) the First Minister and Deputy First Minister, or (b) by not less than 30 Members.

How could the House of Commons’ recall arrangements be reformed now?

Without the government initiating reform, there are still at least two possible routes to take the reform of recall forward in this Parliament.

First, the House of Commons Procedure Committee could revisit the matter and conduct its own inquiry. This would enable the issues to be revisited and the views of newer MPs to be taken into account. However, while the Committee can make recommendations, it cannot implement them; it would still be reliant on government to do so.

Alternatively, consideration of recall arrangements could form part of a wider review of Standing Orders which the Leader of the House of Commons, Jacob Rees Mogg, suggested when he gave evidence to the Procedure Committee in June that the Committee could helpfully undertake. The Hansard Society suggested in October 2019 that such a review might be a priority for the new Speaker of the House via a new Rules Review Committee. Alternatively, such a Rules Review Committee could be established as a sub-committee of the Procedure Committee. A fresh review of Standing Orders which sought to address the question of ‘Whose House is it?’ might help to move the debate about recall forward.

The House of Lords after the pandemic

How the Covid-19 pandemic has accelerated parliamentary modernisation